What did Egyptian pharaohs wear?

Most Egyptians were dark in complexion and not particularly tall. According to a study from 2015, in which 259 mummies from all epochs of Egypt were examined, the men from the common population were on average only 165.7 cm tall. Women were a bit smaller at 157.8cm.

The clothes of ancient Egypt

Clothing in Egypt was mainly made of linen. But sheep and goat wool and even clothing made from grass, reeds and hemp were worn by the ancient Egyptians, even if the latter was not necessarily one of the favorites. Egyptian cotton, which is still famous today for its quality, only began to establish itself very slowly from the 3rd century BC onwards. Through, silk a little later in the Ptolemaic epoch. On the other hand, flax, which was used to make linen clothes, was known as early as 5000 BC. Chr. 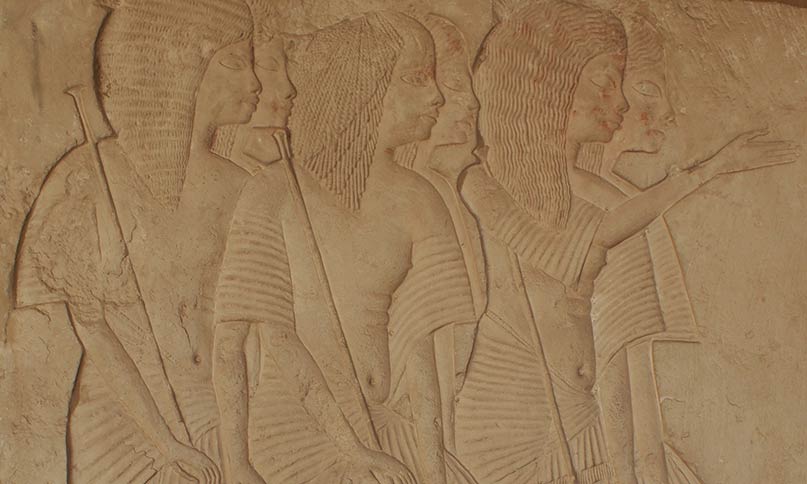 The colors varied from white to light and golden brown, depending on the ripeness of the flax and the type of production. The manufacturers bleached clothing for particularly noble and wealthy gentlemen in a pure white. If you liked it more colorful, you could dye your clothes or parts of them with the help of vegetable and mineral substances blue, red, yellow, purple and dark brown. Or the Egyptians used the colors to decorate their clothing with patterns, hieroglyphics, religious motifs, lotus flowers, animals, etc.

From “royal linen” to “plain weave”

The Egyptians had different categories for their clothes depending on the quality: “royal linen”, “fine, thin fabric”, “thin fabric” and “plain (ordinary) fabric”. The “royal linen” was of such outstanding quality that it was only allowed to be worn by the pharaoh and statues of gods that stood in the temples and were clothed anew every day (see temples). The Pharaoh had the monopoly on the “royal linen”. In order to wash money into the treasury, a small percentage of it was exported abroad. Egyptian linen of varying quality was the export hit par excellence. 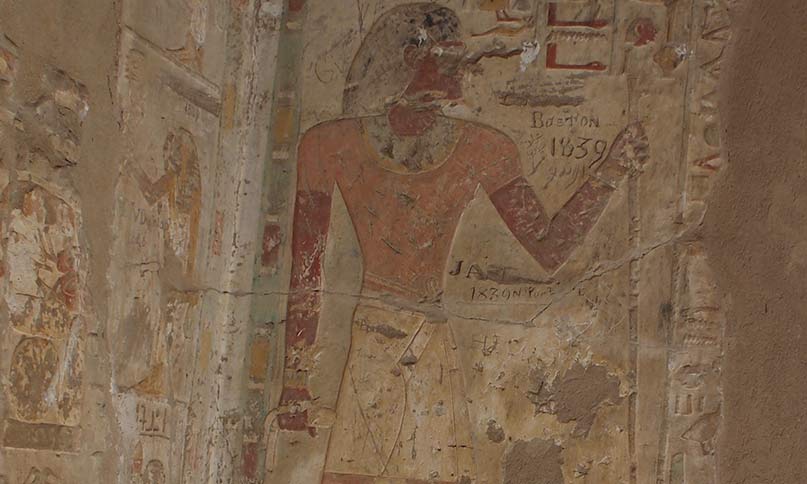 In the New Kingdom everything that was transparent was en vogue. Here Panhesi wears a see-through tunic over his high loincloth.
Tomb of Panhesi, el-Kab
New Kingdom, 18th Dynasty

Because a large part of the Egyptian population were just simple peasants, the “plain weave”, the simple clothing - coarsely woven and of inferior quality - was worn most frequently. Spinning and weaving took place in workshops that were part of the country's temples. But looms were also found in private households.

The richer an Egyptian was and the higher his position, the more elaborate his clothing was. Several layers of fabric were worn, which were held together and decorated with ribbons and shawls. Wealthy women wore nets of pearls over their clothes.

The lower class wore a simple kilt (knee-length skirt) or a loincloth that they wrapped around their hips and the long ends dangling down the front. In the cool evenings they put on a tunic. The common people were not ashamed to appear completely without clothes. We usually only see servants, musicians and dancers in pictures wearing a narrow belt, which certainly also had erotic aspects. The Egyptians did not know feelings of shame and therefore many women in Egypt, whether rich or poor, showed themselves with bare breasts. In the New Kingdom the ladies even showed their shame quite openly. 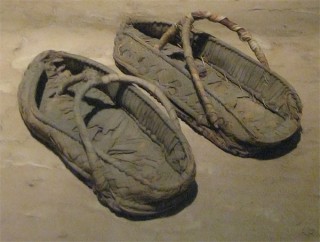 ... the Egyptians didn't wear anything at first. Wealthy people had sandals made of papyrus, grass, rushes or palm leaves that were attached to their feet with thin ribbons. Sandals made of leather were more elegant and robust. Kings adorned their feet with gold sandals. Thong sandals were discovered in Tutankhamun's grave and rumors persist that Tut's footwear was the inspiration for our models today.