What is special about Uttrakhand

Uttaranchal (since 1.1.2007 Uttarakhand) covers the northern part of Uttar Pradesh and extends to 63,157 square kilometers, which is roughly the size of Switzerland. It includes the Garhwal and Kumaon regions grouped under the name Uttarakhand, as well as a narrow strip of the Ganges plain extending to the south. The union state borders in the north on Himachal Pradesh and the People's Republic of China, in the east on Nepal and in the south on Uttar Pradesh. From Dehra Dun, the provisional capital in the southwest, it is around 250 kilometers to Delhi and around 500 kilometers to Lucknow. 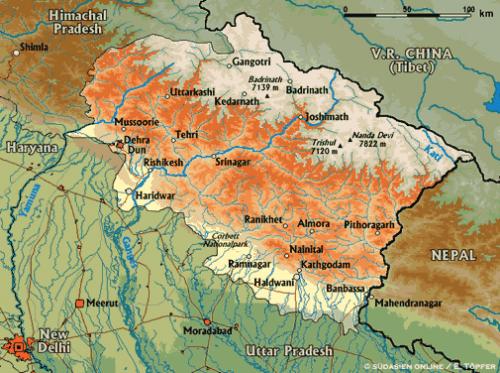 The population of Uttarakhand is only eight million. A large part of the population known as "tribals" lives in the sparsely populated high mountain regions. Until the border was closed, their cultural and economic exchange was oriented more towards Tibet than towards the south. The societies there are not or only weakly subdivided into castes; their religion includes both Tibetan Buddhist and Hindu elements. Nevertheless, even in the more "Hindu" groups, Brahmanic rituals and mythology only play a subordinate role.

The middle-altitude Garhwalis and Kumaonis are mostly composed of native Brahmins and Rajputs. The population classified as Other Backward Casts (OBC) comprises here - in sharp contrast to the remaining Uttar Pradesh - only an extremely small part. Today's main difference between the very similar regions is certainly the difference in the language - the Kumaoni and the Garhwali.

Brahmins and Rajputs also dominate the lowland areas, although the Punjabis (predominantly Sikhs) and Bengalis who immigrated after independence and division live here.
Economy and Infrastructure

Uttarakhand is an agricultural state, there are no major industrial companies. Agriculture is mainly geared towards personal needs. 70% of the fields are smaller than one hectare, larger fields and plantations can only be found in Udham Singh Nagar.

The cultivation of millet and various vegetables (peas) dominates the higher altitudes. Rice can only be grown economically up to around 1,800 meters. The annual rice yields do not cover the needs of the population, so that the additional amount required has to be imported from the plain. Since this will be taxed both in Uttar Pradesh and Uttarakhand in the future, an increase in the price of rice and other goods obtained from Uttar Pradesh is to be expected.

The vast forests are of particular importance. Until the 1980s, large parts of the population fell victim to a "Timber Mafia" cartel of wholesalers and regional bureaucracy. To protest against the overexploitation, the Chipko movement arose in Gahrwal in 1973, which tried to prevent trees from being cut down by "hugging" trees. Under pressure from the movement, the central government finally banned logging over 1,000 meters high, but also withdrew the traditional rights of use from the locals.

Great hopes for future development are placed in hydropower plants. Power plants have been built on the upper reaches of the Vishnuganga and near Tehri for several years, although they are as controversial in the region as the dam project in the Narmada Valley. Overall, the possible power generation is estimated at up to 40,000 MW, which would enable larger exports to the neighboring Union states.

One possibility for generating income and jobs within the framework of a sustainable economy could be the commercialization of fruit growing and processing based on the model of Himachal Pradesh. The same applies to the various medicinal plants. However, beyond studies, hardly any efforts have been made in this direction to date.

Most of the income has so far been generated by tourism (around 100 million DM per year). In Garhwal, in addition to the pilgrimage destinations Gaumukh, Badrinath, Kedarnath and Yamunotri and the religious center Rishikesh, there is also a first ski resort in Auli. Except in the area around Almora and Nainital and on the pilgrimage routes to Kailash (which have been reopened in 1981), Kumaon has hardly been able to attract tourists or pilgrims.

Ideas about future economic development range from hopes for a "Switzerland of India" with flourishing tourism and significant electricity exports, to plans for sustainable development on a rural basis, to fears that the state will not be economically viable and will depend on the allocations made by the central government will depend.

The most pressing problems are the supply of cheap food, the solution of infrastructure problems and the creation of jobs in the manufacturing sector. This suggests that the new political leadership will probably be visiting New Delhi more often for the foreseeable future.

Until independence, the two regions of Garhwal and Kumaon remained separate political entities for most of their history. A feeling of togetherness only developed in the recent past.

State structures can be proven since the early Middle Ages. Until the end of the 18th century, the region was characterized by the rivalry between the two principalities. It was only when they were conquered by Gurkha armies from neighboring Nepal that the two princes came together on the side of the British. As a result, Kumaon and the East Garhwals were annexed to the United Provinces. Only Tehri Garhwal remained a semi-sovereign principality until 1949.

After the division in the wake of independence, the Punjabis and Bengalis settled in the upstream plains. Although a plan developed under British rule included the settlement of demobilized soldiers from the mountain regiments, the immigrants succeeded in acquiring large estates and legalizing their possession with the help of the regional administration during the 1960s.

The economic neglect of the region by the government in Lucknow, the political and economic dominance by the local bureaucracy and the immigrant landowners as well as the exploitation of the forests led to the emergence of the first regionalist movements at the end of the 1960s. In the 1970s, the disputes focused particularly on the deforestation and the increasing consumption of alcohol, it was not until 1989 that the demand for autonomy gained prominence again with the establishment of the Uttarakhand Sanyukta Sangarsh Saniti, an umbrella organization of regionalist groups. The slow and inadequate government aid after the devastating earthquake in 1991 increased the alienation of the mountain people from the political leadership in Lucknow.

The attempt by the state government led by the Bahujan Samaj Party in 1994 to extend the OBC quota of 27% of the public sector to the mountainous regions of Uttar Pradesh met with bitter resistance from the predominantly upper-class mountain dwellers. The quota would have meant a restriction of the scarce jobs and the renewed influx of lowland residents and their continued dominance in the administration. On October 2, 1994, police attacks occurred on the way to a demonstration. The riots that followed escalated as state police rapes became known. Despite monthly protest marches, the government declined an apology. It was not until 1996 that compensation for the dead and rape victims was promised.

In August 1996, the Congress (I) government under Narasimha Rao declared its support for the division of Uttar Pradesh and the creation of two more states. The Bharatiya Janata Party (BJP) also agreed. In addition to the pressure from the population, strategic considerations about future majority relationships played a role, as did the hopes that smaller states would be able to better coordinate their economic development.

17 of the 22 MPs in the new parliament of Uttaranchal are BJP members (as of 2000). Since no new elections are planned, but only the old parliament of Uttar Pradesh was divided, the BJP can govern the Union state without serious opposition in this legislative period. Resistance threatens rather from the ranks of its own faction, as shown in the disputes over the capital and the post of chief minister. In addition to personal enmities and the usual battles of rank, the different loyalties of the MPs to the regionalist movement or to Lucknow are important. Contrary to the movement's hopes, the capital will not be in the mountains, and the governor and chief minister also come from the plain.

By the end of November, the administrative machinery of the new state was not yet fully up and running, partly because many senior officials of the Indian Administrative Service (IAS) are difficult to persuade to move to the mountains.

In his public appearances, the new Chief Minister, Nityanand Swamy, has not yet been able to make any concrete statements about his political and economic plans. However, his demand for a special status in the distribution of funds by the Planning Commission seems to be successful, which would mean that the structurally weak young Union state would only have to repay 10% of the development aid payments from New Delhi compared to the usual 70%. Swamy's announcement that after the expiry of the existing alcohol concessions in April 2001 no new licenses were to be issued came as a surprise. This corresponds to a demand made by many women in Uttarakhand since the 1970s, but, as the experiences of other "dry states" show, it is unlikely to be enforced.

Particular problems for the political stability of the new state are to be expected from the Udham Singh Nagar district. The local population feels that they belong to the plain and refused to join Uttarakhand. The large landowners also fear for the security of their property in an administration and legislation dominated by the mountain regions. The support of the Sikh party Shiromani Akali Dal, ruling Punjab, which is coalition partner in New Delhi, could lead to a relenting of the BJP regarding the inviolability of property relations and stronger representation of the district in the new state.

Another problem could be the increasing agitation of the religious right. Statements in the Vishwa Hindu Parishad indicate that Uttaranchal (where, apart from the Sikhs, there are hardly any religious minorities in Udham Singh Nagar, but many "heterodox Hindus" live) are developing into a deployment area for Hindutva forces for a first true "Hindu state" could.