Storm on the Capitol
Attack on America's Democracy 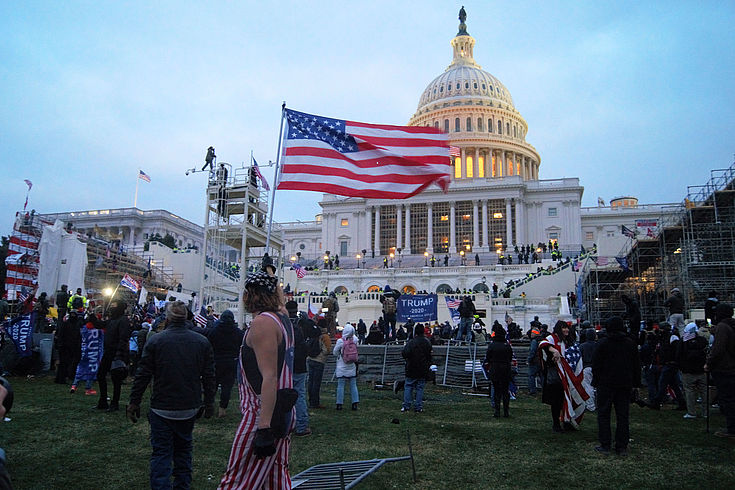 Trump's actions were aimed at political overthrow. The new impeachment procedure of the Democrats is based on this accusation: Incitement of Insurrection / call for overthrow, i.e. attempted coup.

Images of violent storms on parliament and public protests against the political class are known from other places. Boris Yeltsin climbed onto a tank in 1991 and wound down the Soviet Union, and in 1993 Yeltsin had parliament bombarded to bring the last hard-core communists to their knees. In 2014, people took to the streets in Kiev to protest against mismanagement and corruption and for democratic values. The toll was high in Kiev. Over 100 freedom fighters were shot. So now Washington, on Epiphany 2021, with the opposite sign. The good guys sit in parliament, the mob rages on the streets and rampages their way into Congress. Barriers and security forces are overrun, the MPs protect themselves in specially guarded rooms, the Congress session to confirm the election victory of Joe Biden is interrupted and only resumed late into the night after the evacuation of parliament. The escalation of violence claims five lives. Washington, America and the world are in shock. The images of the protests go around the world. Crazy costumes and bizarre scenes mix with unpredictable violence and political fanaticism. Trump's supporters are sending out global shock waves. Ultimately, the attack on America's democracy will be averted, but the effect is devastating, nationally and internationally. America is falling as a political and democratic role model, Donald Trump is completely unmasked on the home stretch of his presidency as a dangerous extremist and demagogue. Republicans are playing with the populist fire that Trump is fueling. It is a political ride on the knife edge.

With the events of January 6th, Donald Trump's undermining of America's political institutions reached a new high point. Trump does not recognize judicially verified election results, he calls on heads of authorities to falsify elections and his vice Mike Pence to violate the constitution. He encourages his supporters, who have traveled to Washington in their thousands, to storm the Capitol while the election results from the states are being certified there. The occupation of parliament may also have lacked strategic depth and in no way threatened a de facto takeover of government by Trump supporters. Donald Trump obviously had the plan to use the violence of the street to prevent Joe Biden as the new president and to keep himself in office. This unheard-of behavior and thought pattern completely discredits Donald Trump - and with it the Trump movement, which is now considered an uncontrolled and violent mob. Trump's actions were aimed at a political overthrow and the new impeachment procedure of the Democrats is based on this accusation: Incitement of insurrection / call to overthrow, i.e. attempted coup.

Deadly parliamentary storm shapes the balance sheet of the presidency

Trump's erratic, unconstitutional and dangerous behavior after the election defeat puts the stamp on his presidency. It will no longer be said that Trump was more of a symptom than the cause of undesirable developments. Trump is proving to be a dangerous fire accelerator that threatens to tear himself, his movement, the Republican Party and America into the abyss. Trump's presidency was controversial, not only because of controversial and erratic administration, but also in terms of content. On the border with Mexico, children were separated from their parents as a deterrent, environmental regulations were lifted, multilateral organizations undermined and paralyzed, and international treaties terminated. Republicans, on the other hand, did much good in the presidency. But now the balance sheet of the Trump administration is shaped by January 6th, not by the historic Abraham agreements between Israel and Arab states, not by the tax reform, not by the appointment of three new conservative judges at the Supreme Court, not by flourishing ones Economy and high share prices, not through criminal law reforms that benefited minorities, and not through the creation of special economic zones to locate companies in problem areas. Donald Trump leaves scorched earth behind. Should he be contemplating a political comeback, he is internationally outlawed and a national outsider. Trump abuses the political trust of millions of his voters and bears significant responsibility that the two Senate elections in traditionally republican Georgia for the GOP were lost and that the Democrats now have a majority in the Senate. Trump did not campaign for the Republican candidates or send a political message, but lamented for weeks about alleged electoral fraud or corrupted electoral processes. Trump demobilized instead of mobilized. While the Democrats were able to put their voters, including large parts of the Afro-American minority, to the polls, Republicans often stayed at home. The Republicans lacked those votes and made a huge difference in federal politics. Despite a narrower than expected presidential election and despite the strong performance of the Republicans in the House of Representatives and in the regions, the Democrats now have a majority in Congress and are in charge of the government. This constellation is called Unified Government or Unified Congress, i.e. unified governance or governance from a single source. Even if there can be no talk of thorough governance, since simple majorities are not enough for large legislative projects; The Democrats are now at the levers of power, they set the agenda and use the rules of procedure for themselves, they provide ministers, parliamentary speakers, senate leaders and committee chairmen. A close election on November 3rd turned into a huge Democratic victory thanks to Trump.

Republicans face a strategic dilemma. With the Trump movement you discredit yourself, frighten parts of the conservative electorate and don't win elections. Without the Trumpists, however, you won't win elections either, as important Republican votes would then be missing. The Republicans face serious internal debates. You need to redefine republican values ​​such as civil liberties, a liberal market economy, free trade and international responsibility and take convincing political positions in tax, migration and health policy. The political art lies in keeping a distance from Trump, but keeping the frustrated, protest voters and those disappointed in the system on board. At stake is the Republicans' ability to survive without Trump. Those who tolerate extreme conspiracy theorists from QAnon and violent radicals from ProudBoys in their ranks will dig themselves up political credibility. Trump's millions of voters are a pound to run over, but it's a political tightrope walk that can lead to falling. The aspiring and ambitious Senators Josh Hawley from Missouri and Ted Cruz from Texas threaten to fail in this balancing act. Despite the excesses of violence at the Capitol, they stuck to the Trump camp and refused to recognize the Biden victory. They are now becoming frightening exemplary characters who show how not to do it: namely, by holding the rod in Donald Trump's vassal loyalty.

The Republicans are now in the opposition, from which they can get out of the opposition faster than is thought today through clever action, sensible positions and convincing staffing levels. The house majority in 2022 is well within reach, considering that the president's party usually gets a damper in the mid-term and loses seats. Since Joe Biden speaks of himself as the interim president, his vice-president Kamala Harris could see the opening gap and seek the highest office himself. Her goal was to make history: First female asian-african-american president / first asian-african-american woman to head America. Younger, more feminine, more colorful doesn't get it with the Democrats. But for a country that voted for the populist Donald Trump in 2016, this could go too far. If you think of Nikki Haley, the Republican candidate would benefit from the backlash against Kamala Harris. The Trump trauma would have been overcome, the Republicans would have learned their lesson and be back in power. It doesn't have to happen that way, but it can happen that way. But it can also happen that the Republican Party falls apart into a Trump camp of populists and nationalists and a camp of moderate conservatives. Ten years ago the split into the radical tea party and the establishment could still be prevented. There is no guarantee that this will now succeed again. It is now about the future of the Republicans. After January 6, 2021, it should be clear to everyone that this future with Donald Trump does not exist. There are bright minds and political talents among the Republicans, including governors like Larry Hogan from Maryland and Charlie Baker from Massachusetts, as well as Senators Tom Cotton from Arkansas, Marco Rubio from Florida and Ben Sasse from Nebraska. Paul Ryan, who was President of Parliament until 2018 and Mitt Romney's running mate in 2012, is also expected to make a comeback. With their late but consequent turning away from Donald Trump, Vice President Mike Pence and Mitch McConnell, the Republican majority leader in the Senate, set the political direction. This does not solve the Republicans' strategic dilemma, but we can continue on this path.

The storming of the US Parliament raises legitimate questions about the security concept. It was known that thousands of Trump supporters would gather for protests in Washington, DC. They had met on chat forums like Parler, Rumble, MeWe, Telegram, and Discord. They were not checked in advance on arrival, and the police did not implement preventive security management. On the day itself, the security services, especially the U.S. Capitol Police, overwhelmed. Reinforcements had been rejected in advance by the Trump administration, there was no invisible police presence in side streets that could have been called in if necessary. A ban mile was not imposed. Donald Trump watched the escalating situation unmoved in front of the television. It was up to Mike Pence to take over crisis management and call in additional security guards. In the evening the Capitol was evacuated and the congress session continued. The night and the next few days in Washington remained calm. The chiefs of the parliamentary police lift their hats and investigations over the next few weeks will uncover the police failure. There is a serious suspicion in the room that President Trump issued internal instructions to treat his supporters gently and not to block the protests with the police. References to double standards in public safety do not seem unfounded either. While one responded to left-wing protests of the Black Lives Matter movement with a martial security presence, the demonstrations of violent Trumpists were benevolently tolerated.

The bizarre images of the attack on US democracy went around the world. They reinforce America's global loss of reputation, as they seem like recordings from a banana republic. In Moscow and Beijing, the geopolitical antagonists of a rule- and value-based free world order, Washington is denied legitimacy to represent democracy and the rule of law. Undoubtedly, the events of January 6th were a setback to America's global leadership. Ultimately, however, it can be said that America's institutions have survived this crisis too, despite Donald Trump's attempted coup, despite overwhelmed security forces, despite violence in the Capitol. The constitutional process took its course, justice was pronounced, Joe Biden's election victory was confirmed. America's democracy is weakened, but it's alive.