What is the point of a child's meal

The nutritionist Christoph Bier knows what children like. A conversation about soup kaspar, broccoli and parental acceptance. 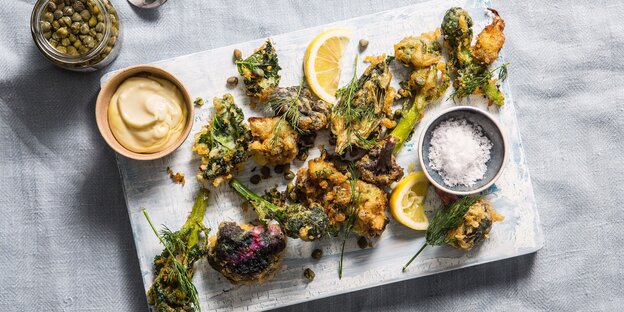 Baked broccoli with capers and dill. It is often a process until you appreciate the bitter. Photo: Stefan Johnson / Unsplash

taz on the weekend: Mr. Bier, what children like to eat and what not is often a mystery to adults. Do children taste different?

Christoph Bier: No, but taste is also a learning process. Children have less experience and are less used to it. That is why they check what they put in their mouths much more intensively. And they are absolutely able to reflect that too. I'm doing interviews with third and fourth graders. It is amazing how small and differentiated they can formulate taste perception.

Do you already have your own language for it?

As a child, I hated pieces of fruit in yogurt. Because of the consistency.

I claim that this is much more important to children than what we, as adults, understand by taste. There's something slippery in your mouth. There are particles. There is a film of fat on the soup, that doesn't work at all. There are bits in the sauce that some children just can't stand. You simply have to take that seriously.

And it was the same with the bitter vegetable broccoli when I was a child. Bitter is a signal that something could be dangerous.

Basically yes. That is why we initially reject the taste or handle it carefully.

You could say that. Genetically, however, we only have a preference for sweets. It stays with us all our life. This is more differentiated with the bitter taste. There are phases. Newborn babies, for example, are not that sensitive to bitter. They bitterly refuse only in high concentrations. Shortly after birth, when the child is breastfed, the child's organism assumes that everything harmful in breast milk has been filtered out. The sensitivity only increases a few weeks after the birth.

Can you say that only then does something like taste develop at all?

The internal stimuli, i.e. hunger, thirst, satiety, no longer play a role shortly after weaning. Our entire eating behavior is culturally determined. Taste develops in a socio-cultural learning process in which there are different mechanisms. Neophilia or neophobia, for example ...

... so the desire for or the defense against new foods ...

... are innate patterns, there are phases here too. The neophobia is least pronounced in children between the 4th and 6th month of life. This is the time when complementary foods are usually fed. It makes sense if the child first accepts as much as possible of what the parents offer.

44, is a qualified ecotrophologist and head of the network unit for daycare and school catering in the Saarland Ministry for the Environment and Consumer Protection. He supports daycare centers and schools in the development and quality improvement of the catering offer.

And when does neophobia come?

When the child becomes mobile, between the 18th and 24th month, it is most pronounced. Which is also useful so that the child does not put everything in their mouth when they start crawling and walking. These are processes that persist. The neophobia, however, weakens with age, in parallel with the development of our wealth of experience.

So our tastes are aging.

Yes, in two ways. On the one hand to the effect that our taste buds are getting fewer, so we need more intense impressions in old age. But taste also matures with the wealth of experience we build and the attitudes we develop. Being able to enjoy wine or coffee is a process that sometimes takes years. Especially until you have the ability to identify nuances and appreciate them - even bitter things. And therein lies the opportunity for children.

About the child who spits out the broccoli?

Yes, although there is still a special case here. Maybe it is one of the "super push buttons".

Are these people with the perfect sense of taste?

No, these are people with a particularly strong sense of bitter-tasting substances, around 25 percent of the population. This can lead to incredibly frustrating moments. The parents say: Come on, don't be like that. They do not understand why their child vehemently rejects a certain food and deny the child that it tastes bitter because they themselves do not perceive it that way. The child does not feel taken seriously at the moment. And then we come to the “soup kaspar problem”. At this point, however, this is systematic and not one of the child's.

What should parents do who have the feeling that their child is picky and is developing into a "soup kaspar"?

Take the child seriously and continue to eat what they like with pleasure. That does not mean that the child reaches for the food exactly. But at some point it will lead to trying other things as well. We call this imitation learning. Seeing that parents are enjoying is a very important motive for doing so. Then there is also a good chance that your own eating culture can be established when you move out of your parents' apartment at the latest.

This text comes from the taz on the weekend. Always from Saturday at the kiosk, in the eKiosk or with a practical weekend subscription. And on Facebook and Twitter.

For a certain part, yes. But it's also worry that drives them. They want their child to eat well and “healthy” - and sometimes they overshoot the mark. If you approach it with patience, serenity and a lot of empathy, then things will develop well.

Do you also observe children who eat with appetite but then slam the cutlery, even though the plate is not empty, saying that they are full but want dessert five minutes later? As a cook, you wonder whether the food was really tasty.

And can it have dessert?