Which business model has made your entrepreneurship successful?

That is why it was out of the question for organizer Steffi Blumentritt to cancel the event due to the increased risk of infection at the scheduled venue in Stuttgart: "Right now, start-ups need an exchange with top managers in order to benefit from their know-how and experience," she said. That is why the event was held at short notice via video.

Every start-up is given the opportunity to exchange ideas with one or more executives in four rounds of talks. This is not about who has the best prerequisites for a business that is rocketing on the stock market. Anyone who wants to solve a real problem with a good idea will be helped with all challenges.

That is why some founders take part with the aim of selling their solutions to the managers. Others use the opportunity much more to speak openly about difficulties in developing a business model and in the search for capital.

For the first time this year, Weconomy has set itself the task of promoting female entrepreneurs in a targeted manner. For many years, hardly any women had applied for the format in which companies such as Bosch, SAP, BASF, Trumpf, Daimler and Drägerwerk offer help with advice and contacts - and repeatedly become long-term business partners for the founders. Some of the supporting companies are among the most active in Germany when it comes to working with start-ups. This is shown by an evaluation of the start-up Glassdollar, which brings established companies and start-ups together. 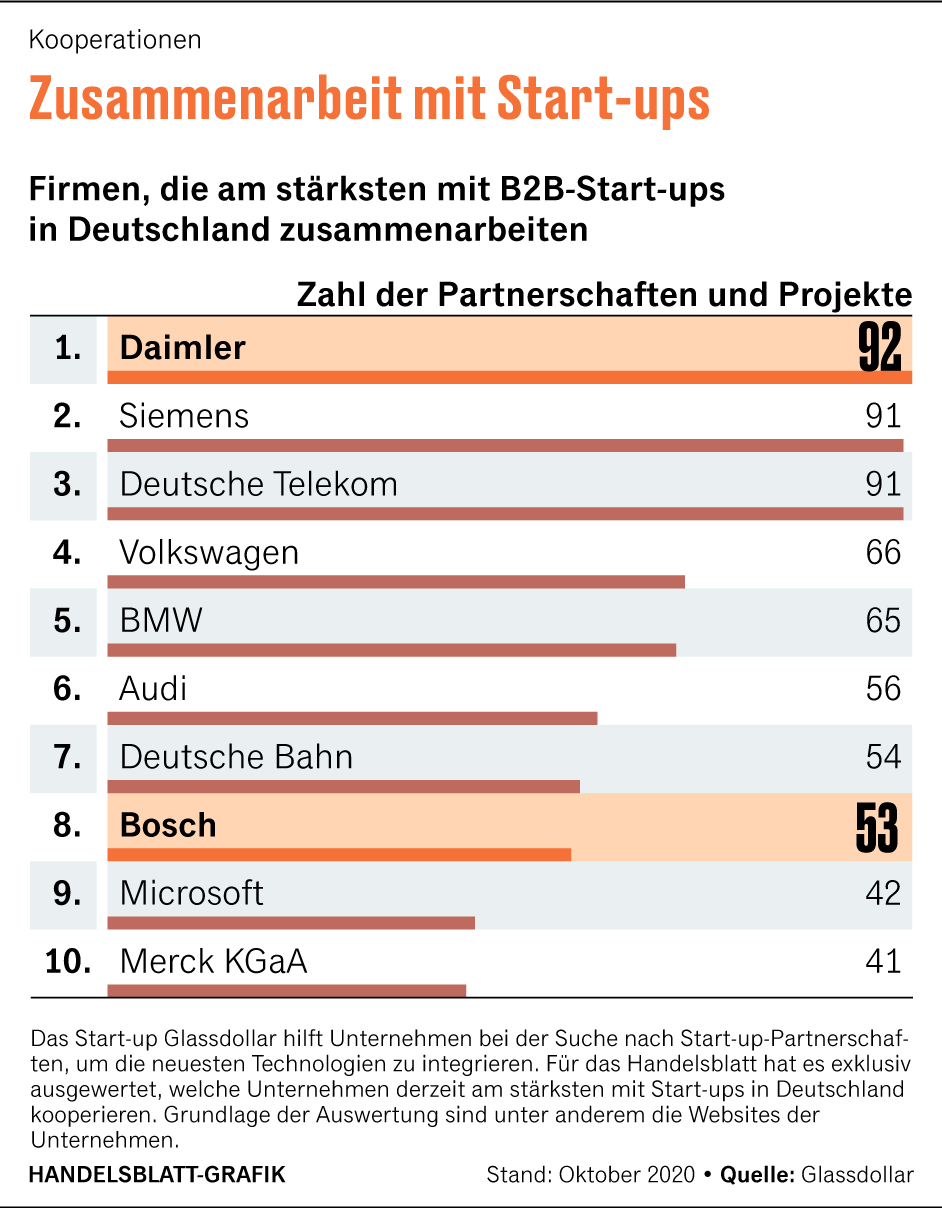 The organizers want to help ensure that not only male founders benefit from this and that start-ups do not remain a male domain. For this reason, for the first time in 2020, they only allowed start-up teams with female participation.

"There are excellent female founders in Germany," says jury chairman Burkhard Schwenker, who is the advisory board chairman at the management consultancy Roland Berger - you just have to look for them longer. "We believe that it helps to show role models and that we can bring a whole new impetus to the start-up scene," he explains. The proportion of women in the jury and among the advisory top managers was also increased to 50 percent. Surprising for the organizers: after a lot of advertising efforts, a record number of applicants was finally achieved with 119 entries - despite the new rule.

According to Schwenker, the quota regulation has proven itself once again, even if such statements would have brought him “shit storm”. Looking at the selection round, he sums up: "We saw excellent, reflective and not so self-centered applicants, as is often the case."

As a partner of the Weconomy competition series, the Handelsblatt was allowed to take part in several consultations. Three examples show what start-up founders can learn from top managers - and how managers benefit from founders.

Researchers from start-ups and corporations come together

The start-up Cognibit from Munich develops simulation models for the human behavior of drivers, pedestrians and cyclists. The providers of autonomous vehicles and driver assistance systems should be able to test whether cars with the new technology are roadworthy.

Behind it are three neuroscientists who have researched when drivers get tired and pedestrians get impatient at red lights. "We are developing a tool that generates precisely this realistic behavior in the simulation platforms that the manufacturers already have," says co-founder Isabelle Garzorz. The prototype for the Carla open source system has been in place since September.

“In terms of technology, it's extremely exciting,” says Bosch managing director Michael Bolle, who also works with the automotive supplier in this area. “Pedestrian protection in particular is a very difficult topic - but what is your business model?” The three scientists don't ignore it for long: “We want to offer the developer tool as a software license with annual fees,” says Garzorz - but there were still no concrete commercialization plans. That arouses ambition at Bolle and the second expert in the group, Vector computer science founder Helmut Schelling.

On the way to autonomous driving, systems that are designed so that the driver can intervene in an emergency would be a long way off, says Bolle. Recognizing the driver's attention is an important issue.

“You don't just have to transfer your findings into the model, but also into an app that is installed in every car,” reflects Schelling, who develops software tools himself with his company. “Then you would have completely different scaling options!” At the end of the conversation, Michael Bolle made sure that the three founders contact the Bosch research department.

Almost everyone knows the problem that Alice Martin and her co-founders solve: a mole suddenly looks very dark, a skin rash itches devilishly, but the dermatologist has not had an appointment for weeks. That is why dermatologist Martin often received photos from friends via WhatsApp. “Is that something serious?” Your experience: Most diagnoses can be made immediately using photos on mobile phones - and with some diseases the chances of recovery are much better than weeks later.

From this she developed a business idea with three other doctors, the dermatologist via app. Her company Dermanostic, which started in April, offers a diagnosis within 24 hours, including a doctor's letter with therapy and prescription, for 25 euros. To do this, patients have to upload three photos and fill out a questionnaire. The founders are certain that artificial intelligence, which can be trained with their diagnoses, will play a major role in the long term.

"We have to come into contact with you, we need such tools for very, very different areas," says Katrin Sternberg, Head of Development at Aesculap AG in the pharmaceutical and medical technology group B.Braun. In the area of ​​surgery patients, where Aesculap is active, she sees possible applications in the observation of wound healing, for B.Braun's pharmaceutical area in accompanying studies in which creams are tested for side effects.

One of Dermanostic's problems: the statutory health insurances have not yet covered the treatment. “That is why we want to first win companies as customers who take on the treatment of their employees as an employer service”, says co-founder Patrick Lang. After all, it also reduces lost work time. This week we will talk to B. Braun about it - Katrin Sternberg has promised to put in a good word in case of doubt.

The bots from Porsche, S.Oliver and Innogy are already getting better with their help: "We help departments without programming knowledge to develop and train chatbots with ease", says co-founder Michelle Skodowski. To this end, the company Botfriends has developed its own platform, which is based on existing offers from Google, Microsoft, IBM and other cloud service providers - these are currently not easily usable for companies.

“The customers out there are already using the technologies that are offered by the big ones, and we see this as our chance to get in there with our platform,” says co-founder Kevin Dees. The team wants to know from the managers whether they should also think about an “on-premises offer” in which companies do not have to go to the cloud, but use server-based computer programs.

The answers are differentiated. Ulrich Dietz, head of the board of directors of the software service provider GFT, points out that companies that work cloud-based are rated many times higher by investors than others. “As a smart entrepreneur, you can draw the conclusions yourself,” he says. Bosch managing director Michael Bolle reflects the Botfriends founders' perspective of customers who would probably not be served with such a consideration: Large industrial companies are now moving towards the cloud. Nevertheless, "some of them still strive to keep sensitive data" on-prem "."

Like the Botfriends founders, all winners of the Weconomy competition should fare at the end of the day. You've gathered quite a lot of wise advice. How they turn their good ideas into successful companies still depends on them.

More:Unicorns from the crystal ball: How AI should recognize start-ups in the billions.